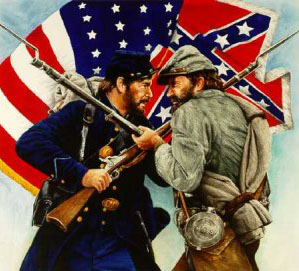 One-eighth of the whole population were colored slaves, not distributed generally over the Union, but localized in the southern part of it. These slaves constituted a peculiar and powerful interest. All knew that this interest was somehow the cause of the war. To strengthen, perpetuate, and extend this interest was the object for which the insurgents would rend the Union even by war, while the Government claimed no right to do more than to restrict the territorial enlargement of it. Neither party expected for the war the magnitude or the duration which it has already attained. Neither anticipated that the cause of the conflict might cease with or even before the conflict itself should cease. It may seem strange that any men should dare to ask a just God's assistance in wringing their bread from the sweat of other men's faces, but let us judge not, that we be not judged.
Abraham Lincoln
Second Inaugural Address
Saturday, March 4, 1865

I happened to come across a lot of digital books on the Civil War for both the North and South states.  I will be taking snapshots of the rosters for a lot of the states as my typing is slowing down and I just don't have the time to type each and every line of the books.  When I run across headstones for the soldiers, they will be listed on the page with the link of the unit they are in.